Our Product conforms to IS 16013:2012 specifications. This product can supplied with customized mesh as per requirement.

Gabions banks are constructed to protect the seacoast or the River Coast against the erosion due to water and waves. Gabions will withstand alternative tension and compression without losing structural passage of water throughout the structure. Also they are found to be more advantageous than other gabions in marine and river environment as they are inert to alkaline and acidic attack. They are much reliable and long lasting than marine structures constructed using the dumping of stones.

Gabion walls can be built with speed and economy and are particularly suitable for landslide control in mountains. In-ground liable to subside, the capacity of gabions to deform makes them preferable over a concrete wall. 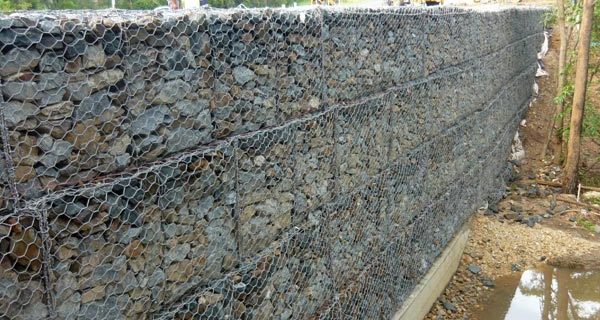 Gabions Can be used as stacking platform entity for fly over’s and over bridges or slopes against erosion Other uses include noise-barriers and slit filtration from runoff. The Gabions can be used to protect scouring around the bridge piers and other important structures.